An Introduction to Turkish Cuisine

For those who travel to engage in culinary pursuits, the Turkish Cuisine is worthy of exploration. The variety of dishes that make up the cuisine, the ways they all come together in feast like meals, and the evident intricacy of each craft involded offer enough material for life long study and enjoyment. It is not easy to distern a basic element or a single dominant feature, like the Italian “Pasta” or the French “Sauce”. Whether in a humble home, at a famous restaurent, or at dinner in a Bey’s mansion, familiar patterns of this rich and diverse cuisine are always present. It is a rare art which satisfies the senses while reconfirming the higher order of society, community and culture. A practically minded child watching Mother cook “Cabbage Dolma” on a lazy, grey winter day is bound to wonder: “Who on earth discovered this peculiar combination of sauteed rice, pine nuts, currants, spices, and herbs all tightly wrapped in translucent leaves of cabbage, each roll exactly half an inch thick and stacked up an oval serving plate decorated with lemon wedges? How was it possible to transform this humble vegetable to such heights or fashion and delicacy with so few additional ingerdients? And, how can such a yummy dish also possibly be good for you?”

The modern mind, in a moment of contemplation, has similar thoughts upon entering a modern sweets shop where “Baklava” is the generic cousin of a dozen or so sophisticated sweet pastries with names like twisted turban, sultan, saray (place), lady’s navel, or nightingale’s nest. The some experience awaits you at a “Muhallebici” (Pudding Shop) with a dozen different types of milk puddings. 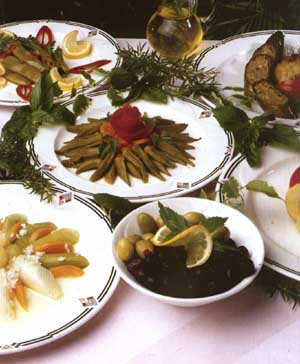 One can only conclude that the evolution of this glorious cuisine was not an accident, but rather, as with the other grand cousines of the world, it was a result of the combination of three key elementes, a nurturing environment, the imperial kichen, an a long social tradition. A nurturning environment is irreplaceable. Turkey is known for an abundance and diversity of foodstuff due to its rich flora, fauna and regional differtiation. Secondly, the legacy of an imperial kitchen is inescapable. Hundreds of cooks, all specializing in different types of dishes, and all eager to please the royal palate, no doubt had their influance in perfecting the cuisine as we knoe it today. The Palace Kitchen supported by a complex social organization, a vibrant urban life, specialization of labor, worlwide trade, and total control of the Spice Road, all reflected the culmination of wealth and the flourishing of culture in the capital of a mighty Empire. Finally, the longevity of social organization should not be taken lightly either.

The Turkish State of Anatolia is a millennium old and so, naturally, is its cuisine. Time is of the essence, as Ibn’i Haldun wrote, “The religion of the King, in time becomes that of the people, “which also holds for the King’s Food. Thus, the 600 year reign of the Ottoman Dynasty and an exceptional cultural transition into the present day of modern Turkey led to the evolution of a grand cuisine through differentiation, the refinement and perfection of dishes, and the sequence and combination of the meals in which they are found. It is quite rare when all three of the above conditions are met, as they are in French, Chinesse and Turkish cuisine. Turkish cuisine has the added privilage of being at the crossroads of the Far East and the Mediterranean, resulting in a long and complex history of Turkish migration from the steppes of Central Asia (where they mingled with the Chinesse) to Europa (where their influance was felt all the way to Vienna).

Such unique characteristics and extensive history have bestowed upon Turkish cuisine a rich selection of dishes all of which can be prepared and combined with others to creatre meals of almost infinite variety, but always in a non arbitrary way. This led to a cuisine that is open to impravisation through development of regional styles, while retaining its deep structure, as all great works of art do. The cuisine is also an integral aspect of the culture. It is a part of the rituals of everyday life. It reflects spritually, in forms that are spesific to it, through symbolism and practice.

Anyone who visits Turkey or has a meal in a Turkish home, regardless of the success of the particular cook, is sure to notice the uniqueness of the cuisine. Our intention here is to help uninitiated enjoy Turkish food by achieving a more detailed understanding of the reportoire of dishes and their related cultural practices as well as their spiritual meaning. >>