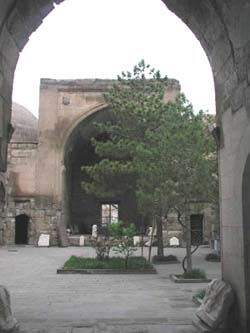 One of the historical buildings of Aksaray Province oc Cappadocia area is Zinciriye Madrasa. Constructed by Yahsi Bey of the Karamanogullari (1336 – 1338), the building is made of cut stone and brick and is the type of madrasa with four vaulted rooms with one side open to the courtyard, three porticos and a courtyard. It is topped by a vault and dome, with an eight sectioned open top courtyard.

The entrance is by the eastern crowned door. Decorated with niches, the door is low arched. The vaulted rooms are cowered with plant and geometric motifs. Its portal is embellished with plastic art motifs which continued the Seljuk tradition.

In the southern vaulted room is the tomb of Dingoz Baba (Father Dingoz – 18th. C.). It has functioned as a madrasa to the current period and one of its peculiarities is that it has the appearance of a castle.