Day 1
Upon arrival in Istanbul (Ataturk Airport), the city of two continents, you will be greeted by “Turkey Tourkey” representative with Turkish hospitality & accompanied during your transfer to the hotel (Check-In 13:00), where you will be briefed by your travel consultant. Overnight in Istanbul.

Day2
Your day will commence with a visit to the ancient Byzantine Hippodrome where you will tour the Egyptian Obelisk, Serpentine Column, Fountain of Wilhelm II, the elegant Blue Mosque famous with its heavenly six minarets and the Hagia Sophia Museum, built during the reign of Emperor Theodosius and burned down in the fire of Nika Revolt in 532 A.D. Just before lunch break, you will visit the Underground Cistern. After lunch, you will visit the Topkapi Palace (excluding harem), residence and administrative center of the Ottoman Sultans. Day tour will finish with the visit of Grand Bazaar. Overnight in Istanbul.

Day 3
Meet your guide at hotel lobby for a short drive to Spice Market, Egyptian Bazaar heaped with various sweets & spices is one of the world’s largest spice bazaars since 1665. Soon after, you will visit the Rustem Pasha Mosque. Then embark on the Bosphorus ferry for an unforgettable cruise along the Bosphorus, the beautiful strait that divides Europe from Asia. After lunch break, day tour will continue with driving across the first Bosphorus Bridge & head for the summit of Camlica Hill, which offers 360° panoramic views of Istanbul overlooking the Sea of Marmara. Driving back to Europe over the Bosphorus Bridge, you will visit Dolmabahce Palace (excluding harem), the imperial residence of the last six Sultans, with more than 340 rooms & 8 Turkish baths
At the end of the tour overnight in bus.

Day 4
The Explore and Hike Tour visits southern Cappadocia and starts at 09:30 by pick-up at your hotel. After our guide’s introduction to Cappadocia, we drive about 10 min and visit the most spectacular gorge of Turkey: Ihlara. 6 km hike in the Ihlara Valley will be highlight of our day. The Melendiz River has carved an impressive canyon through the verdant valley and we will walk about two hours along the river, passing Byzantine rock chapels decorated with frescoes. Especially the first half of the hike where we will be the only tourists walking, is totally peaceful. We end the hiking portion of the tour near Belisirma village, where we will have lunch in a quaint riverside restaurant and then we stop at the biggest rock-cut monastery of Cappadocia, Selime Monastery and Kathedral. Selime is the biggest rock-cut cathedral of Cappadocia and located at the end of Ihlara Valley. It has has been used as a fortress by both Byzantine and Seljuk armies during 10th to 12th centuries.
We will then drive back to hotels and finish the tour around 16:30.
Overnight in Cappadocia hotel

Day 5
Our professional guide and the driver will pick you up at your hotel at 9:30. The first stop is Esentepe, the impressive panoramic viewpoint overlooking Goreme. Here your guide will give you information on the history of Cappadocia and the unique rock formations. From here we visit the beginning of Rose Valley for an easy one-hour hike through fairy chimneys, orchards and vineyards. Our next stop is the Goreme Open Air Museum, a UNESCO World Heritage site. Your guide will explain the meanings of the frescoes in the cave churches, decorated with scenes of the Old and New Testaments dating back to the 10th century. The site has been used as a monastery since the first years of Christianity. For lunch we will visit a lovely restaurant in Goreme. After lunch we make several photo stops along the way – includingUrgup’s family fairy chimneys, Devrent’s animal-shaped rock formations and Monk’s Valley with the famous mushroom-shaped fairy chimneys as well as St. Simeon’s monk cell carved into the rock. Day one concludes in Avanos, a picturesque town on river that supplies clay for the 4000 year-old Avanos tradition of pottery. A kick-wheel demonstration by a local potter and your chance at trying this ancient custom brings our day to an end back to hotel.
Overnight in Cappadocia

Day 6
After breakfast early morning we drive to Konya and see the imposing green-tiled Mausoleum of Mevlana, the mystic founder of the Islamic Sufi sect (Sufism is less an Islamic sect than a mystical way of approaching the Islamic faith. It has been defined as “mystical Islamic belief and practice in which Muslims seek to find the truth of divine love and knowledge through direct personal experience of God.” “Whirling Dervishes”). After the Konya Tour Depart for Pamukkale and after visiting Pamukkale travertens overnight in Pamukkale

Day 7
Tour starts with deaprt to Ephesus/ İzmir about 5am and start Ephesus tour with tour guide.During the tour we will see Ephesus ancient city, Celcius Library, Temple of Artemis, Temple of Hadrian, Great Thearte, Trojan Fountain, and St John Basilica. After lunch, we will see Ephesus museum and House of Virgin Mary.At the end of the tour, we will take you to İstanbul by bus overnight in bus

Day 8
(Breakfast included)
We hope your tour was a memorable one and we would like to see you in the future in one of our tours again.After breakfast check out from the hotel. We make your return airport transfer services. Have a nice trip back home. 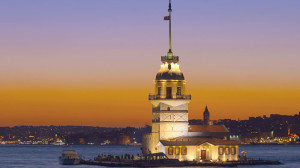 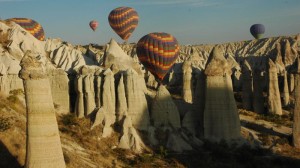 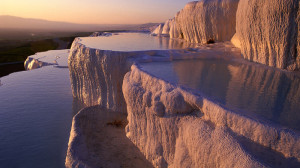