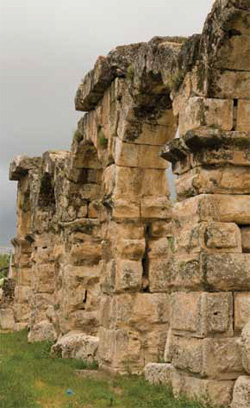 The ancient name for Nigde was “NAHITA”. The artefacts found at the Kaletepe Obsidian Workshops date back to 600,000 B.C.

There are ongoing excavations at: the Kaletepe Obsidian Workshops, Bahceli Kösk Mound, Ciftlik Tepecik Mound, Pinarbasi Mound, the Tin Mine Quarry discovered at Camardi Kestel and at the Göltepe of Madenci Köyü. These projects demonstrate that Nigde was first settled 10,000 years ago and that there have been civilisations in Nigde continuously since then to the present day.

From Assyrian and Hittite written documents and from the work going on at the Porsuk Mound excavation we learn that Hittite rule began in 1,800 B.C. and continued for a thousand years. In 710 B.C. the region passed eventually from Hittite to Assyrian sovereignty and after the Assyrians it passed to the Phrygians. In the period up to becoming Roman in 17 B.C. the region was home to the Medines, the Persians, the Hellenistic Cappadocia Kingdom of Alexander and the Kingdom of Pergamum. When in 395 A.D. the Roman Empire split into two Nigde became part of East Roman (Byzantine) lands.

The Turks began arriving in Anatolia in 1071 as the Seljuk Dynasty and continued to expand until 1308. In 1470 the region was definitively under the rule of the Ottoman Empire and remained so until the emergence of the Turkish Republic. Nigde Museum >>