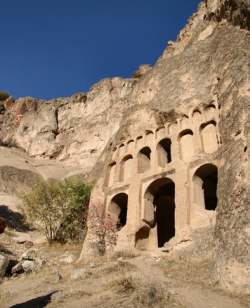 Aksaray offers the traveller unique journeys into one of nature’s showcases. It boasts beautiful geological formations and a rich history. It is a charming town at the heart of the Cappadocia region.

The Ihlara Valley is a wonderful example of nature, people, history and art being bound togother in one place. The innermost secrets of it come slowly to light when you begin to explore.

The first civilisation at Aksaray on the volcanic tufa-rock lands of Cappadocia was at Asikli and dates from 8.000 years B.C. At Asiklihoyuk (mound) is the oldest village belonging to the Neolithic Period in Anatolia and the Near East.

In its long history Aksaray has been the cradle to various civilisations. From 3000 B:C. to 2000 B.C. the Hatti tribes lived in Anatolia. During this period Assyrian merchants traded in this area.

Towards the end of the period of colonisation, the Hittites coming from the Caucasus around 1700 B.C. founded small city-states and made Anatolia into a military state.

In the 1st C. A.D. St Paul and the disciples began to spread Christianity provoking the polyheistic Romans. For the sake of safety the early Christians started to seek out less confrontational places to settle. Also many religious men seeking solitude came to this region.

Aksaray’s first name is believed to be “Nenessa” (Nenessos), a term which wasfound in ancient Hittite scripts. In the first millennium B.C. during the reign of King Kiakki, Aksaray was known as Sinakhatum – Sinakhtu, but in the Hellenistic period it became a territory of the kingdom of Cappadocia and its name was changed into Arkhelais from Garsaura.

Aksaray came under Seljuk sovereignity in 1142 during the reign of Kilicaslan II. At this time palaces, madrasas, lodged and caravanserais were built. Kilicaslan II. built a palace and changed the name from Arkhelais to Aksaray (lit. pure palace) and it became a virtual second capital city. The city did not allow bad people to enter. And because of this it was known as “Sehr-i Suhela” meaning the place where goog people live. Aksaray became part of the Ottoman Empire in 1470 when it passed to Ishak Pasha. After the conquest of Istanbul the city was under populated and many Aksaray people were resettled in Istanbul, which is the reason that there a district of Istanbul named Aksaray.

In 1920 Aksaray became a province. In 1933 that status was annulled and it became of the province of Nigde. On June 15th, 1989 it became a province once more. The region has been home to different religious artefacts found here belonging especially to the Islamic and Christian periods. Of hundreds of examples 29 have been chosen as being especially valuable from the point of view of religious tourism. Of these eight are Islamic, each a masterpiece in its own right that attract hundreds of thuosands of visitors. The examples are:

Excursions in Aksaray and its vicinity offer nature, history and culture all in one package.

A one day excursion to the west of Aksaray should ideally start at Acemhoyuk, one of the largest mound settlements in Anatolia, which is located near Yesilova village. Following the visit to Acemhoyuk, the next stop is Sultanhani where one can watch carpet restoration work and shop for carpets. While in Sultanhani, the world’s largest caravanserai, after which the town is named and which is a historical masterpiece, must be seen. Moving ahead from Sultanhani toward Eskil, one can join a guided safari tour to the Salt Lake where endemic plants and numerous bird species can be seen.

Excursions in downtown Aksaray usually include visits to Aksaray Museum, Ulu Mosque, Egri Minaret, Aksaray Culture House, Somuncu Baba Tomb and Masjid, which are followed by visits first to Canli Church in Akhisar, and then to the Nora ancient city and Helvadere pond, all in the vicinity and general direction of Mt. Hasan.

During the excursion to Guzelyurt and the inns, one should visit Agzikarahan and Tepesi delik han on Nevsehir highway and then go to Saratli Underground City. From Saratli, an ideal excursion would include visits to the historical houses at Demirci Village, Asikli Mound at the Kizilkaya Village, Selime Kathedral in Selime Village, and last not least the Ihlara Valley. From Ihlata Valley one must definetely go to Guzelyurt and visit Yuksek Church, Masatir Valley and Kizil Church, and finis the excursion at Narli Göl located on the way to Derinkuyu.