Mountaineering has many branches varying from trekking to camping, rock climbing to ice climbing. In time, these branches each developed specific characteristics and evolved into specific methods. One of the main areas differentiating from mountaineering is rock climbing. Climbing a mountain not always includes rock climbing. There are many mountains that are both high and can be climbed up to the summit which wouldn’t require any rock climbing. For example one of Turkey’s mountains, Mount Ararat is of this type. The main difference between climbing and mountaineering is that in climbing, besides the feet and the legs, hands would also be used. Therefore, amongst mountaineers, “mountain climbing” refers to more kind of technical climbing.

Types of rock climbing
Rock climbing has variations within. The variations may depend on whether helping tools are used or not, or if they are, how they are used; the time it takes to complete the route or the height of the wall being climbed on.
Artificial climbing: No matter how experienced you are, for some routes to climb, it is a must to use some extra tools. These types of climbing are called artifical climbing. During artifical climbing, safety equipment like bolts, wedges, spring compressors, carbines, expresses, climbing ropes, safety belts, helmets, dustbags and rock climbing boots. Depending of the type of use these items have, artifical climbing has some different styles. These are called tope rope, free climbing, sport climbing and trad climbing.
Free climbing (free solo): If only hands and feet are being used without any other artifical tools, it is called free climbing. Free climbing is the style in which only natural elements are used. Free climbers only use dustbag and climbing boots. Free climbing is the most dangerous type of climbing. Only the most experienced rock climbers prefer this style.
Free climbing (bouldering): Another type of free climbing is bouldering. In this style, the stages are very short. An assistant awaits below the climber to help in case of any falls. The main aim in this style of climbing is more like local endurance, techniques, balance, stepping, clenching.
Big wall climbing: This type of climbing requires at least 3 days of camping on the rock. This is the necessity for a climbing to be big wall. In big wall climbing the team must meet their needs for food sleeping and toilet on the rock they’re climbing. The team has to live on the rock until the end of the route.
Sport climbing: All types of artificial climbing except big wall climbing are gathered under the name sport climbing. Their common characteristics are the shortness of the routes and their preparedness. In sport climbing, technical qualification and physical power is in the foreground. This type is generally preffered for it being short which can be done on excursions near the city and as a training. It is the main reason for this style to have increasing popularity in the last few years.

Rock climbing in Cappadocia
In 1967 a climbing camp was organised on Ala Daglar by the Turkish Mountaineering Federation. There were about 30 people attending the camp and among them were some mountaineers. The mountaineers weredivided into different groups and there were many summit climbs by those groups. This climb is reckoned as the beginning of technical wall climbs. 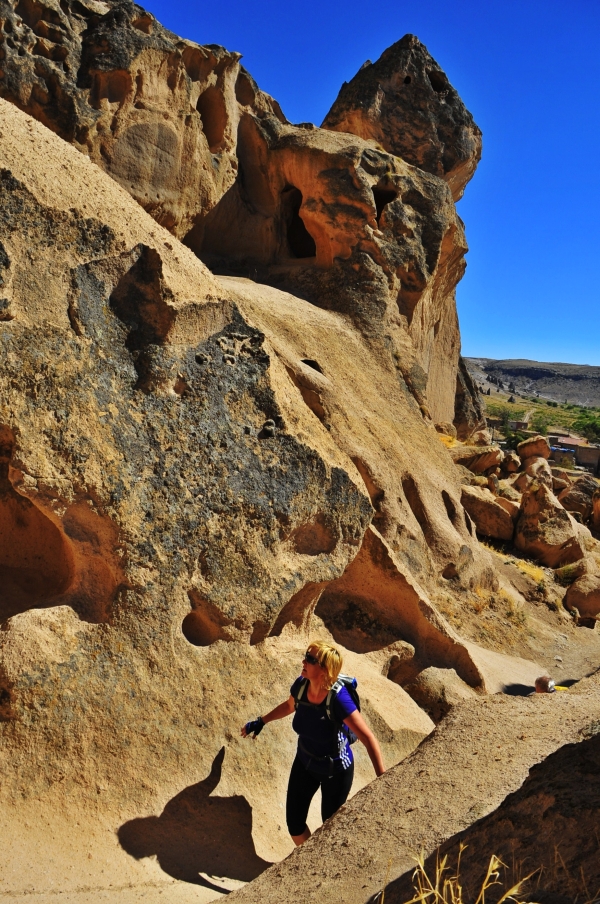