Abseiling, meaning rope drown or descent down a rope, is a new brand outdoor sport. It started in New Zealand at the beginning of 1990’s. At that time, the idea was landing with certain descent by jumping tided up from a flat surface cliff. Like this it was like a commando rock landing. However later on these landings received a new form by the sporty being face down and running down from the spot. This new form called as abseiling really asked for high level of adrenalin. The one who will be doing abseiling first position him/herself on the rock parallel to the ground and then as she/he release the rope with hands, starts to run down. At a short distance to the ground she/he should stop running and stop.

With this new form abseiling became very popular in a short time period. As it became popular, reformations in the concept started. It became a sport for everyone not only for the ones who are in love with adrenaline. The face down running is replaced by safer flat landings. After its evolution today abseiling is a world wide sport. In abseiling, the sporty that goes down, does not climb again therefore it is important to have trekking racecourses around the abseiling places to go up once again.

The basic supply of abseiling is the climbing harness which will be used to tie up the descender. The round carbine, which gathers the harness, should be in “maillon rapid” shape. Most of the harnesses have their own collar. The two locked carbine is tied up to maillon rapid on the harness. One of them is for figure eight and the other is to fix the security rope. Instead of figure eight, descender can be used in abseiling. Actually usage of descenders is safer and easier. As you push the latch of descender you may go down, as you stop pushing it the system will lock itself automatically and you hang on the rope. Namely it is impossible to fall down if you are using descender. The other standart equipment in abseiling is the helmet. Without a helmet the landing cannot be performed. It is needed as a precaution for possible stone fall offs and head hitting because of the skidding. 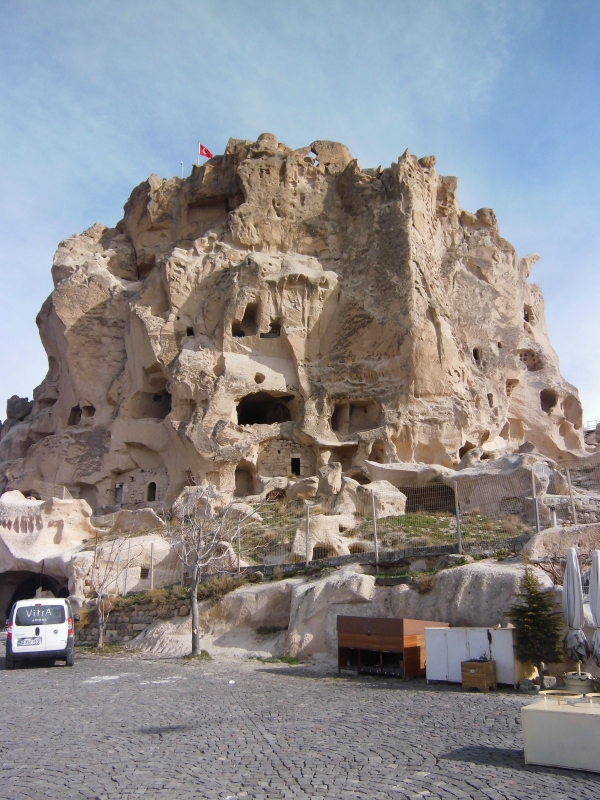 Some of the outdoor activity agencies in Cappadocia include abseiling in their programs. To do abseiling you do not need to be experienced. To trust in the system, to get to know the equipments and a little bit courage will be enough for you to try. You will have 30 minutes training on the ground or 2-3 meters high wall and then you will be able to enjoy this sport. Abseiling in Cappadocia is being done with double rope safety system, without middle stops and 30-40 meters high block landings. The rock block of Ishak Castle in Ortahisar is one of the most current places. The landing is performed through the Roman grave and with the decoration of Ortahisar Castle in the historical atmosphere of the area. The total of the landing is 62 m.